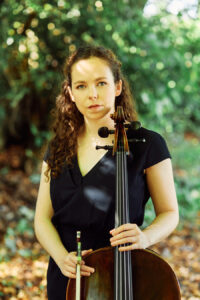 26-year-old cellist Sinéad O’Halloran is quickly establishing herself as one of Ireland’s most exciting young musicians. Co-founder and Artistic Director of the Ortús Chamber Music Festival, Sinéad is passionate about bringing together Irish and international musicians for concerts, education work and audience development in the wider community.

An avid chamber musician, Sinéad has collaborated with musicians including Tasmin Little, Barry Douglas and the Vanbrugh String Quartet. In 2020 she made her Wigmore Hall debut at the invitation of cellist Steven Isserlis, as part of the IMS Prussia Cove Autumn Tour, performing alongside Anthony Marwood, Timothy Ridout and Mishka Rushdie-Momen. She looks forward to performing again in Wigmore Hall in June 2021.

As a member of the European Union Youth Orchestra (EUYO) for seven years, she toured Europe, South America, the United Arab Emirates and the Caribbean. As Principal Cellist of EUYO she led the section at numerous high profile events, including the BBC Proms and The Armistice Day 100 Years Anniversary Ceremony, performing at the foot of the Arc de Triomphe during a ceremony marking the centenary of the end of World War I in front of 84 Heads of State and world leaders, and a live television audience of millions. At the invitation of Maestro Iván Fischer, she works regularly with the Budapest Festival Orchestra, touring extensively and performing in some of the world’s finest concert halls, including Carnegie Hall, Philharmonie de Paris, Elbphilharmonie Hamburg and Het Concertgebouw. She has also performed with the Chamber Orchestra of Europe, Irish Chamber Orchestra, Spira Mirabilis, Georgian Chamber Orchestra and the iPalpiti Ensemble of International Laureates. She regularly plays under some of the world’s most renowned conductors, including Bernard Haitink, Gianandrea Noseda, Vladimir Ashkenazy, Jörg Widmann and Vasily Petrenko.

Sinéad has a postgraduate Performer’s Diploma from Southern Methodist University in Dallas, Texas and a first-class Honours B.Mus from the Robert Schumann Hochschule Düsseldorf. She is currently on an Erasmus+ Scholarship as part of her Masters Studies at the Royal Northern College of Music in the class of Hannah Roberts, where she has recently been announced as a Finalist in the RCNM Gold Medal and Concerto Competitions.

Sinéad gratefully acknowledges support from the Arts Council of Ireland, Music Network, the Department of Culture, Heritage and the Gaeltacht, the Cork City Arts Office, DAAD and Deutschlandstipendium. She currently plays on a Benjamin Banks cello c. 1780. 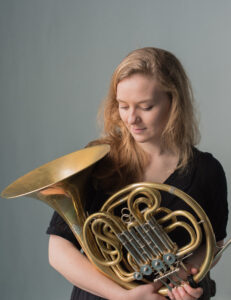 Horn player Hannah Miller embodies an exquisite blend of international artistry, having grown up in Ireland; attained her Bachelor degree at Finland’s Sibelius Academy; and recently graduating with a Master’s degree from New York’s Juilliard School, where she was awarded with the William Schuman Prize for outstanding achievement in music and leadership.

Since being appointed Associate Principal Horn with the Kuopio Symphony Orchestra, Finland at age 21, Hannah has shone as an orchestral musician, heard with the Royal Liverpool Philharmonic, BBC National Orchestra of Wales, Irish Chamber Orchestra and Tapiola Sinfonietta and most recently joining the Verbier Festival Orchestra. Through these orchestras she has worked with conductors including Esa-Pekka Salonen, Fabio Luisi, Valery Gergiev, Itzhak Perlman, Leif Segerstam and Alan Pierson. As a soloist she
has been heard in concerti by Strauss, Schumann and Vivaldi.

As a member of the Irish contemporary music group Kirkos Ensemble, she has been featured in solo and chamber music concerts performing a wide range of modern works. Hannah’s commitment to new music has expanded in recent years to include performances with Crash Ensemble in Ireland, London and Amsterdam and with Ulysses Ensemble in collaboration with Ensemble InterContemporain, IRCAM and Orchestre Philharmonique de Radio France as part of the ManiFeste Festival.

In his native Germany, Peter Rainer (violin) is a concertmaster and a founder of the Kammerakademie Potsdam, and leads an active career as a chamber musician, soloist, and teacher. Since 2007, Peter has been on the faculty of the “Universität der Künste” (University of the Arts) in Berlin and of the “Stern Institute” for young talented students. Most recently, he was chosen by “Hanns Eisler Hochschule für Musik” to head the string department of “Musikgymnasium Carl Philipp Emanuel Bach,” a school for highly talented musical kids.

He was the founder and leader of the Persius Ensemble, focusing mainly on repertoire written for the classical nonet, and has released three CDs; a CD with nonets by Spohr, Clementi and Mozart, which was chosen by Berlin-Brandenburg Radio (RBB) as one of the best releases of 2007. He has been a member of the Max Brod piano trio since 2012. In 2016, the piano trio released a CD of compositions by Robert Kahn, a wonderful discovery of romantic music in style of Johannes Brahms. Music-loving children know Peter Rainer through the many interactive concerts he developed for them in the past 20 years, such as Till Eulenspiegel, Ferdinand the Bull, The Horse on the Violin, to mention a few.

Peter Rainer studied violin in the U.S. with Professor Eduard Schmieder at the Meadows School of the Arts, where he received his Artist Certificate in 1994 and his Master of Violin Performance degree in 1995. Upon his return to Germany, he was concertmaster of the Brandenburgische Philharmonie in Potsdam from 1996 to 2000. In 2005, he received a commendation from the City of Los Angeles for his leadership of iPalpiti and his contributions to culture. 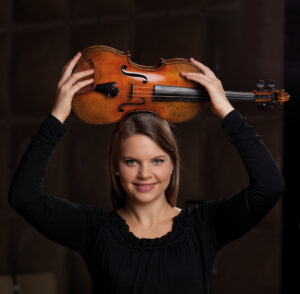 Stephanie Appelhans, (b. 1991 Wickede, Germany), received her first violin lessons at the age of five. As a young student at Folkwang University Essen she studied under Prof. Paraschkevov before completing her Bachelors at HfM “Hanns Eisler” Berlin with Prof. Mücke. She also received a DAAD Scholarship to study at the Guildhall School of Music London. She earned her Masters at UdK Berlin with Prof. Peter Rainer and is currently
pursuing a Konzertexamen with Prof. Eichhorn at HfM Weimar.

Stephanie has been a prizewinner at numerous international competitions, including the Ferdinand-Trimborn-Prize and the International Louis-Spohr-Competition Kassel. In 2012 she was awarded the Kottmann-Förderpreis by the City of Frankfurt and became a scholar of the Konrad-Adenauer-Stiftung.

As soloist, Stephanie has appeared with many different orchestras across Europe: in Scotland in 2007, at the Drüggelter Kunststückchen Festival in 2008, in Gütersloh, Kassel, Berlin and on a tour of Junge Deutsche Philharmonie in Switzerland and Germany under Sir Neville Marinner in 2014. Recently she performed Prokofiev’s 2nd violin concerto with Westfälische Kammerphilharmonie Gütersloh, Brahms’ violin concerto with Universitätsorchester Kassel and Beethovens 2nd Romance with Philharmonic Orchestra of Erfurt.

Stephanie is a passionate chamber musician, performing with the Berlin-based Laguna-Quartett and collaborating with chamber orchestras.

Francesca Gilbert was born in London and began playing the viola at the Junior Guildhall’s String Training Programme. She has studied with Susan Thompson, David Takeno and Matthew Jones. Francesca has recently graduated from the Advanced Instrumental Studies masters course at the Guildhall School of Music and Drama having previously graduated from the GSMD undergraduate programme with first-class honours.

Francesca enjoys a varied performance and recording career and has performed in major venues across the UK, Europe and America. Francesca is grateful for the generous support she has received from the Guildhall School Trust, the Stephen Bell Charitable Trust and the Old Wellingtonian Society.

Francesca’s main passion for chamber music. She is a member of the award-winning Gildas Quartet and regularly performs with various ensembles such as the Laguna Quartet, Vindeleia Ensemble, Ensemble 840 and the 12 ensemble. In addition to this, Francesca is regularly invited to play at international chamber music festivals. This year’s highlights include the Marryat Players Chamber Music Festival, the Ortús Festival and the
Stamford International Music Festival. Francesca also freelances in various chamber orchestras in the UK, she is a regular extra with Sinfonia Cymru, Manchester Camerata and the Faust Chamber Orchestra. 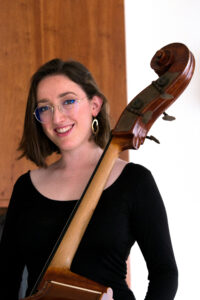 Naomi is currently a member of the Budapest Festival Orchestra and plays as principal bassist of the West Eastern Divan Orchestra. She has played in the Mahler Chamber Orchestra, the WDR Sinfonieorchester Koln, and the Taiwan Connection Chamber Orchestra. She was a participant in the Practicum Program of the Israel Philharmonic Orchestra, the Verbier Festival Orchestra and the Schleswig-Holstein Music Festival Orchestra. In addition to orchestral playing, Naomi has performed as a chamber musician in series of the Tel Aviv Museum and of the Pierre Boulez Saal in Berlin. She is a scholarship holder of the Villa Musica Rheinland-Pfälzische Landesstiftung for chamber music and plays on a Fendt bass, on loan from the foundation.

Naomi received Mafteach scholarships from the Israel Philharmonic Orchestra and The America Israel Cultural Foundation scholarships with Exceptional Distinction (2013-2017). In 2017 she was awarded the Holland Scholarship and in 2018 the Talent Grant, by the Amsterdamse Hoogschool voor de Kunsten. 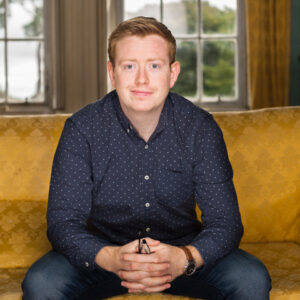 He was the winner of the Irish Freemasons Young Musician of the Year and has performed as soloist with both the RTÉ National Symphony Orchestra and RTÉ Concert Orchestra. Venues he has performed in include the National Concert Hall and RDS in Dublin, University Concert Hall, Limerick, and the Barbican and Wigmore Hall in London.

He completed his MA at the Guildhall School of Music and Drama in London where he was also a Fellow and staff accompanist, and was also mentored by Julius Drake and Charles Owen. He holds a BMus and MA from the CIT Cork School of Music, where he studied with Susan & Jan Čáp, Michael McHale and Gabriela Mayer; and former teachers include Jacques Rouvier (Universität der Künste Berlin) and John O’Conor (RIAM).

He is currently undertaking a Doctorate at the Royal Irish Academy of Music where he is studying with Hugh Tinney. He also teaches piano at RIAM, and is a coach accompanist at the MTU (formerly CIT) Cork School of Music and Irish World Academy of Music and Dance, University of Limerick. 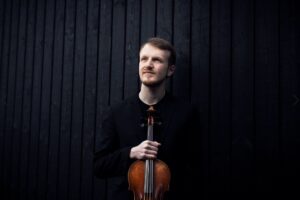 Violist Martin Moriarty is one of Ireland’s foremost musicians and is in high demand as a soloist and as a chamber musician both at home and abroad. Martin has received multiple awards and prizes including the Amsterdam Viola Festival Competition, the Flax Trust Award at the Clandeboye Chamber Music Festival and the Peter Pirazzi Stiftung. As a soloist he has performed with orchestras including the Baden-Baden Philharmonic Orchestra and Amsterdam Sinfonietta.

Martin was the first Irish musician to be accepted into the Verbier Festival Academy as a soloist in 2018 and 2019. Here he worked with world renowned musicians including Tabea Zimmermann, Antoine Tamestit, Ferenc Rados, Ferenc Rados, Gábor Takács-Nagy and Pamela Frank. From September 2021 he will be the first Irish academy musician to be apart of the Villa Musica Foundation in Germany.

Martin began his studies at the Young European String School of Music, Dublin before following further studies in Amsterdam and Detmold with Nobuko Imai, Marjolein Dispa and Veit Hertenstein. He is currently studying with Lawrence Power at the Zürcher Hochschule der Künste.